Sometimes my voice is LEGATO (smooth, flowing) and other times it is STACCATO (sharp, rhythmic)

Developing a clear “voice” that identifies your work is the journey of every artist. We each have to go through the process to create a look and style that is uniquely our own. Some of us seem to find it right away, while for others it takes time.

I was in the second group. It wasn’t that I had trouble “finding” my voice, it was that I was finding too many voices! I was naturally drawn to a variety of styles and had to experiment before I found my home.

The development of technique has been a large part of developing my own voice. Now I know that I am primarily a machine piecer, and especially enjoy the challenge of sewing curves. However, before I knew I preferred machine-piecing, I tried – and enjoyed – many other ways of creating fabric art (which will be the topic of a future post; stay tuned)!

Two sides of the same voice

In my younger years I made my living as a performer, singing in clubs and touring overseas with different bands, including a USO tour to Korea, Okinawa, the Philippines and Guam. Before that, I was a music major in college and earned a degree in classical voice. So when I heard the word “voice” to describe visual art, I felt right at home.

As I was trying to define my own visual voice, however, I became torn between two styles that I loved equally. I had begun developing the “Serenity Series,” with smooth, flowing lines. It was delicious slicing curves into fabric and sewing it together so that it appeared to “bend,” even though it actually lay flat. (It better!)

Then there was another, almost opposite, side to my voice — the sharp, contrasting linear shapes of the “Rhythm Series.”  The predominantly black and white patterns seemed to pop and scatter across the surface, which was a counterpoint to the flowing, peaceful sense of the “Serenity Series.”

I was torn about this dual presentation of my work, because I know how important it is to have just one style with which people can identify (Marketing 101). However, as I settled into both series, I began to realize that, just as voices in music could be alternately loud and quiet, sharp and smooth, rhythmic and flowing, my voice could do the same.

If I put it in music terms — sometimes my voice is LEGATO (smooth, flowing) and other times it is STACCATO (sharp, rhythmic).

Together they make up the whole of my voice. 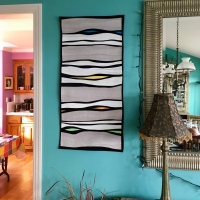 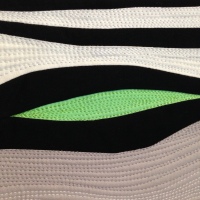 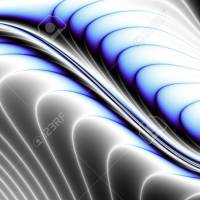